The Annika Schleu Debacle: This isn’t horseback riding; Heck, it’s not even sportsmanship

Even longtime equestrians, who love the Olympics and sports in general, were surprised to discover the Modern Pentathlon – an obscure Olympic event, in which participants swim, run, fence, shoot and ride horses, in a bizarre attempt to mimic the skills of a soldier. The first four skills are fine, but when it comes to the rules of the horseback riding section of the pentathlon, things get very problematic.

The problems surfaced with a vengeance in the Tokyo Olympics, when athlete Annika Schleu “lost” her would-be gold medal because of a “stubborn horse”. That’s how the ignorant media framed the incident, and of course it’s complete horseshit. The video of Schleu’s attempt at riding shows so many errors and instances of bad judgement, it’s incredible. It’s clear that the horse was in distress, probably because of an ill-fitted bit (a draw gag bit, a pretty harsh one and an abhorrently painful bit. In the hand of a bad rider, it’s even worse), and it’s also clear that Annika Schleu didn’t have the slightest clue of how to handle this situation. People like Annika Schleu shouldn’t compete in any sport relating to horses, plain and simple. Here’s the video of Annika Schleu and her disastrous attempt of riding Saint Boy:

The equestrian part of the Modren Pentathlon goes against any reason or regard to horse welfare. The “riders” don’t have their own horses in this event. They receive a random horse from a pool of showjumping horses, and they only have 20 minutes to familiarize themselves with the horse and warm it up. That, in itself, is utterly ridiculous. Not only that, but the task ahead is difficult even under ideal conditions – the rider and horse have to complete a showjumping course, with obstacles 1.20 meter high. Sure, showjumpers do 1.60 meters in the Olympics, but they have their own horse, they train for years and there are strict rules regarding the horse’s welfare, including vet checks and judges that ring the bell and disqualify the rider if something has gone awry. The level of riding in the Pentathlon is abysmal. The riders have no proper seat nor balance, they have no idea how to judge the distances and it’s mostly the horses saving their asses when they can. The choice of a showjumping course is really baffling. Why not choose a dressage test or an equitation course? Something like that is far less dangerous and will enable the judges to see the athlete’s true ability to ride a horse properly.

Any decent horse person will tell you the most important trait you need as a rider is patience. Nothing else works with horses. In this hard-to-watch video, Annika Schleu has lost her composure from the get-go. Apparently, she was in the lead and on her way to a gold medal. One can only assume she thought the horse knows that and will magically yield to her wishes. The horse, Saint Boy, was already ridden by another competitor, who treated him badly. He was already stressed and tired. His tack was hurting him. Perhaps he was scared. And then comes Annika Schleu, all stressed out, racing against the clock, and starts whipping and kicking him in a despicable display of hysteria, although it’s obvious he’s not responding to any of these “aids”. Her coach only exacerbates the problem by encouraging Annika to hit the horse, and she even punches him in an effort to get him going. 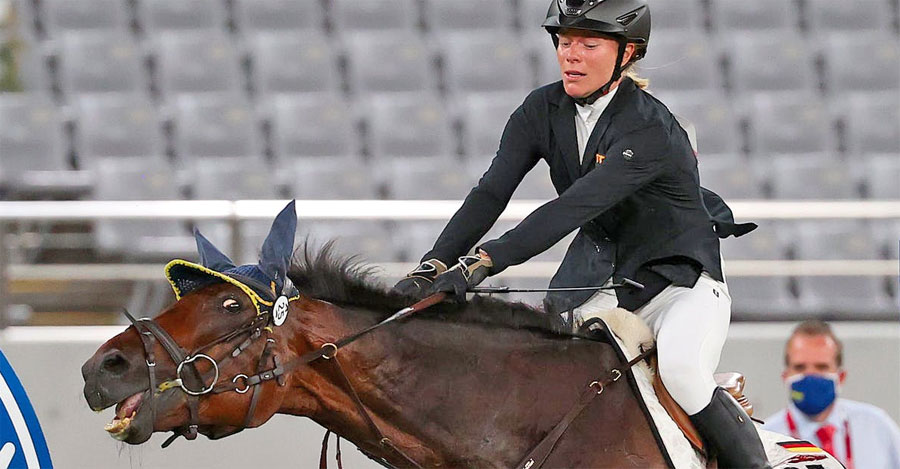 After what seems like forever, Schleu manages to get Saint Boy in a canter, but his distress is still very clear – he’s bending his neck to the outside, she’s sitting badly and bouncing on his back, but he somehow manages to jump a few obstacles. By the time they reach the double obstacle, it’s obvious that this ride is over. What’s even more infuriating, is that the judges didn’t bother to ring the bell and stop this horrendous “riding”, which shouldn’t have even started, really.

On a side note, Schleu’s hysterics are disturbing and pathetic. Is this the behavior you’d expect from a top-notch athlete? One thing goes wrong and you completely lose it? Frankly, it was disgusting and shameful. A proper riding coach would have promptly told her to get off the horse and get her shit together. Drama does not belong in the riding arena.

The media coverage on this event is bad on so many levels, and mostly harmed equestrians that were already under the microscope with many claiming that horseback riding is abuse, and shouldn’t be part of the Olympics. A true rider would have chosen to dismount, give the horse a pat, and wave to the crowd. A good horse-person would have known that there’s no point in continuing this ride, since nothing good is going to come out of it. A true horsewoman always puts the needs of the horse before her own. Obviously, Shcleu isn’t remotely close to being an equestrian and really shouldn’t be allowed near horses.

The damage is done. One can only hope that the Schleu debacle will spark a healthy debate about horse welfare, and that the rules of this weird Olympic event will change or even disappear completely.

About me: An amateur equestrian. Owned by a horse named Talo. A year or so back, Talo fell on me and I broke my pelvis and my ankle. I wrote a book about my healing journey and about going back to riding my horse. Here it is.

Previous Post
Adam Driver and a Horse on the Beach? DEAR GOD IN HEAVEN 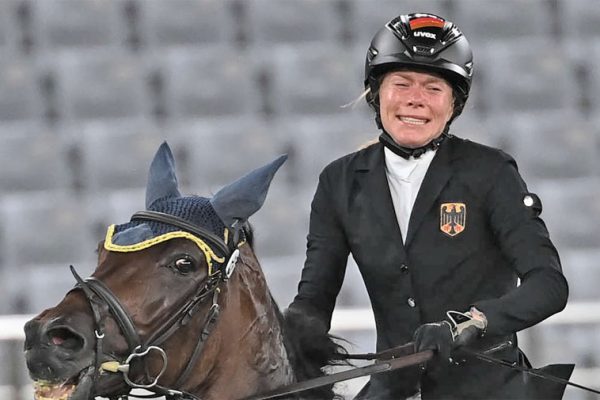