Talo has a new pasture buddy!

When I first got Talo, about 5 years ago, there was this one young mare he could turnout with, and they were very cool together. She was basically the only one, though, because he didn’t play well with other horses and had no sense of personal space. I think it was mainly due to the fact that he wasn’t turned out with others, and the huge amounts of stress he was under during his life here.

As a new horse owner, I was given lots of bad advice, and was subjected to idiotic, hysterical dogmas. One of them was all about over-protecting the horses by either turning them out alone, or limiting their turnouts (to the point of almost no turnout time at all). There was also this school of thought that reckons horses shouldn’t (heaven forbid) RUN while turned out, and that they should immediately be put back in their stall if they get too frisky.

Sure, no one wants their horse to get injured, and a horse going totally wild can hurt itself, but there’s a huge difference between a horse that’s having some basic horsey fun, and a horse going insane and hitting its own self on sharp objects.

Those stupid fears were instilled in me during the first years of horse ownership, by people who aren’t good riders nor good horsemen. I didn’t know any better at first, but I learned.

Turning Talo out is one of my top priorities, and I try to do it daily, even for a short while. Ever since we moved to the new stables, which has grass pastures, turning him out became even more important – and fun. Talo is very happy and relaxed in the pastures, and usually spends at least an hour there every day (and a lot more in the winter, when it’s nice and cool). He’s usually the one who asks to be back in his stall, but I did try to find ways to make him stay in the turnout for longer periods of time. I knew that a pasture buddy may help with that, and I knew it’s an important part of a horse’s life – having a herd.

A short while back, Talo got a new stall neighbor – a dressage horse named Freud. They became instant friends, groomed each other and just hung out next to each other. Freud went away for a while (instructors course with his owner), and I noticed Talo was a bit glum without him. Talo has really mellowed out over the years, and he’s now nicer with other horses, but this was a real bond, so I thought to give it a shot in the turnout. After discussing it with the owners and their instructor, we did a test-run today. 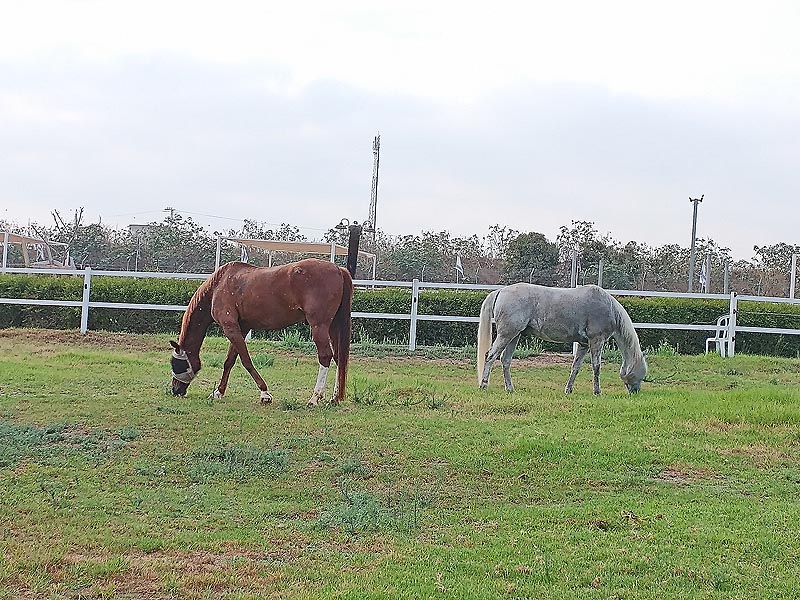 Out they went, our two buddies, and into the grassy turnout. We were alert and ready to take action if shenanigans ensued, and we even had our phones out, to capture any drama for posterity. Well, not only there was no drama, it was a total bore! These two didn’t even bother to groom each other, and went straight to the most important part – eating grass. No picking on each other, no hassling, not even a sniff. Just two buds, out for a bite to eat. Freud rolled in the grass (they were both after a ride), but that was the most exciting part. 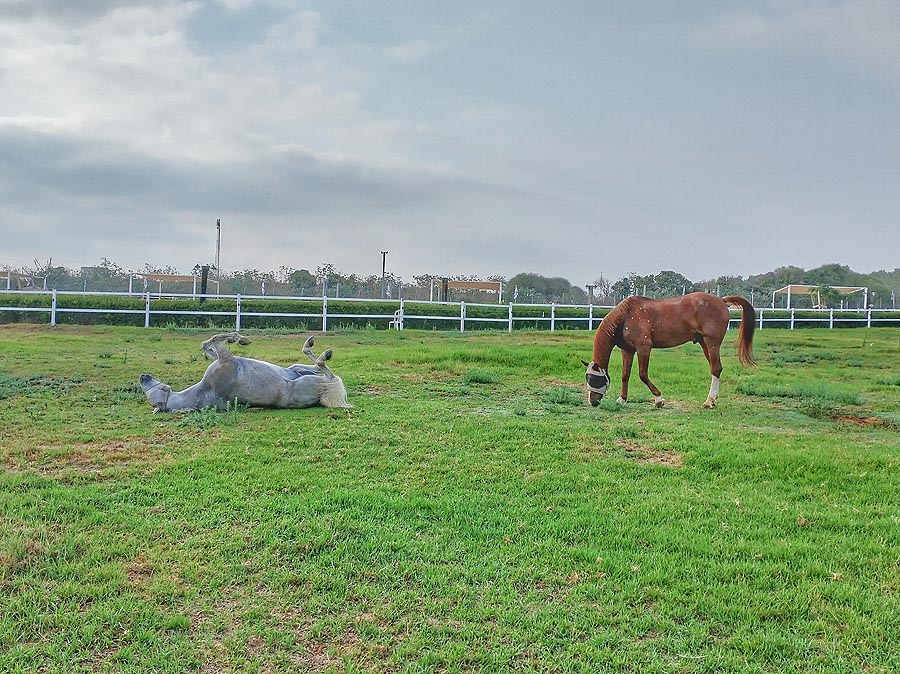 It just made me so joyous, seeing Talo hanging out peacefully with a friend. We now know we can turn them out together, and it will benefit both of them. This hasn’t been an easy year thus far, and it’s not getting easier, so this was a bright spot in a cloudy horizon. When Talo is happy, I am happy. It’s as simple as that.