A few years back, Talo has been diagnosed with EOTRH – Equine Odontoclastic Tooth Resorption and Hypercementosis.It’s a condition mainly affecting older geldings teeth. The tooth loses grip in the gums, getting loose. The body, trying to compensate, creates more calcium and makes the root of the tooth thicker and thicker, until it gets huge and start putting pressure on the horse’s gums from the inside.

EOTRH is progressive and there’s no known cure. The only solution is to remove the problematic teeth – usually the incisors. Not a lot of vets are aware of this condition, but lucky for me, Talo’s dental vet is an expert on the subject, and diagnosed him. A couple of years ago he had his first EOTRH surgery, in which 3 teeth were removed. He recovered nicely, but we knew we’re going to have to remove more teeth.

Yesterday, we had our 2nd EOTRH surgery, in which 2 teeth were removed. That surgery isn’t fun, obviously, and definitely not for the faint of heart. There’s blood and quite a few struggles to keep the horse’s head in place while the vet hammers away with nasty-looking tools. I am not a squeamish person, so I didn’t find it disturbing and I helped the vet all through the surgery. Really, it’s not as bad as it sounds, and it provides much needed relief to the horse. This time we did the surgery in the stables, and didn’t have to go to the hospital, which was much better to everyone included. The surgery took a couple of hours, mostly because the second tooth was a bit more complicated to remove. Even with the anesthesia, Talo did his best to interrupt the vet in her work, and managed to move his head away while one of the instruments was still lodged in his teeth. Hilarious, even when sedated! 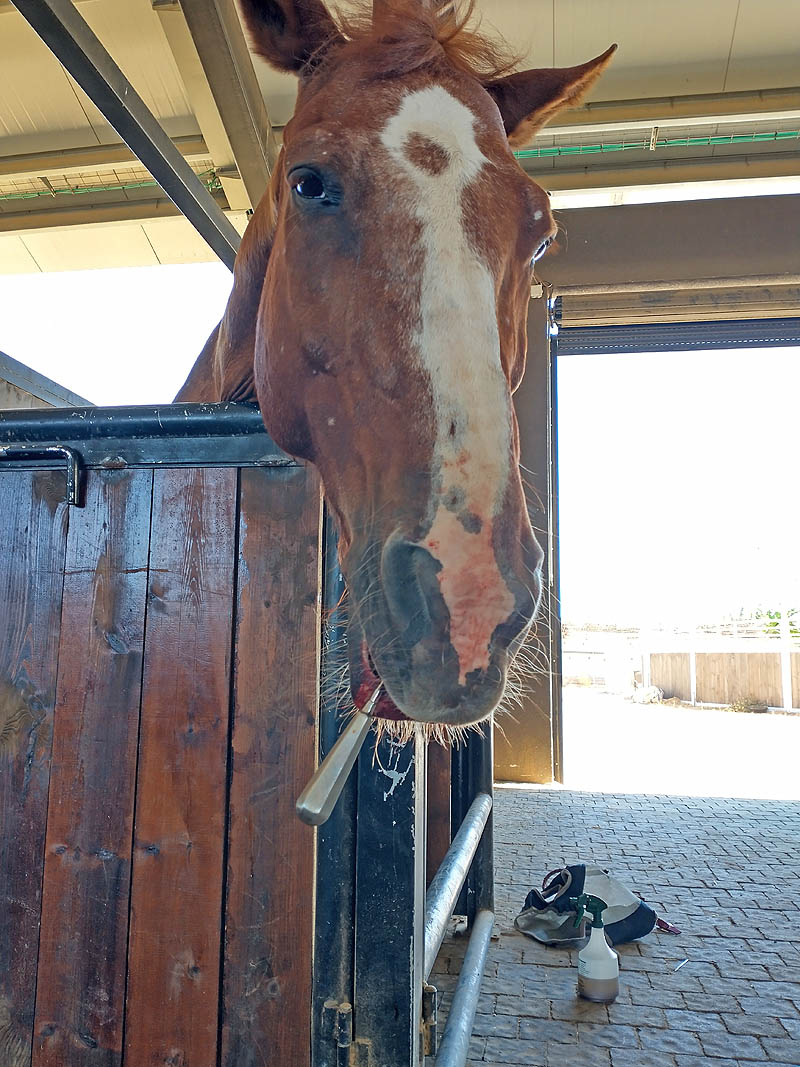 Talo recovered from the anesthesia after a few hours, and demanded food (that was absent for a few hours after the surgery). He went out for a short walk with me, and munched on some grass. He then got hay and alfalfa cubes, and seemed unfazed by the fact that he has two more missing teeth (and a bit of blood still dripping from his mouth). He’s getting antibiotics and I am washing his mouth with salt water. He won’t be working for a week or so, of course, and we’ll get back to our riding schedule once the holes in his gums close up (no stitches, it closes up naturally over time).