I miss him when we are apart 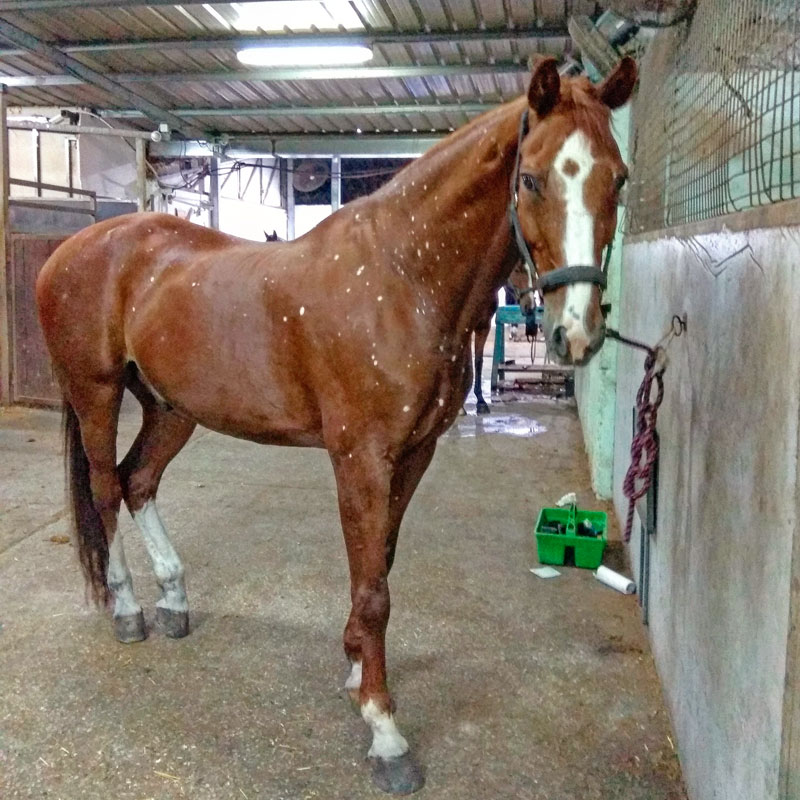 I ride 6 days a week, usually. I see Talo every day, sometimes twice a day. I spend as much time with him as I can, because the rest of the day he’s in his stall.

And still, I miss him after a few hours without him 🙂 I just love my horse so much.

Competition season has started. I should have written about it sooner, but couldn’t find the time and mainly – didn’t feel like it, because I am rather disappointed of my performance.

I expected so much more of myself. Training level 1 is easy for Talo, but I was trying too hard, apparently, and the results were in accordance to that.

First competition that I ever went outside with him, a stable very near to us. We were there hours ahead of time, and Talo got a stall, food and water. He behaved marvelously and was super sweet – even though the place was completely strange and new. We did paid-time and a good warmup. He was a bit strung up as usual, but felt really good. We went on to the test itself and I held him too tight, and pushed a bit too hard. The result – resistance and one annoying buck on the canter transition, that landed us a 4 on that particular exercise and an overall mark of 65%. We took second place, but I wasn’t pleased with my riding. I know we can do better.

The second competition, two weeks later, was a 2-day event up north, in a horrible stable. Talo was well behaved nonetheless, and things seemed OK until we got up to the test itself (after paid-time and a good warmup). We hear the bell, go in the center line and I try to stop at X for a salute.  Talo wouldn’t have it. I don’t know what freaked him, but he just wouldn’t stand still. Never had this problem with him. Our halts are usually the best part of the test, we get 7-9 for them on a regular basis. Well, not this time. The rest of the test was shit, as well. At the final halt he wouldn’t stop either, and the judge kindly let me do it again, but I got a 2 point deduction for this miserable fuck-up. Ended up with a disgusting 61.3% and 8th place.

The woes weren’t over. Talo stayed the night and I got back home. During the evening, I got an annoying phone call. They put an aggressive, nervous horse next to Talo and they were fighting. They told me they will be moving him to a different stall. At that point there was nothing I could do but agree, being an hour drive away after a long day. I came back early morning and was mortified to discover Talo was bitten in the neck and his face had two nasty gashes, probably from sticking his face in between two bars at the stall. He was so anxious he wouldn’t let me near him for a few minutes. I was FURIOUS. The stables manager dismissed me and the injuries as superficial. I was considering either torching the place or just going home. But on we went with the test…

It was a bit better compared to the day before, but not incredibly so. The test was rather flat and not active enough, because I just wanted to do it without any major fuck-ups like on the day before. The result was a lame 64 point something percent and 5th place. Again, super disappointed of myself.

I was considering giving up the rest of the competitions. It’s so expensive to go out and I don’t seem to be performing well at all. I was astonished to discover that despite it all, I was ranked 3rd overall, and still have a slight chance to take the cup or at least 2nd place after the finals. Also, I read this great article called The Ten Habits of Highly Effective Dressage Riders, and it helped my gain some perspective.

So, on we go. This Saturday we have another one-day competition. And we are going to BRING IT. I am aiming for 70% or higher. It may seem over-ambitious but I know we can. Besides, aiming for the moon is good. At worst, you just fall among the stars.

Next Post
Horse Girls know how to handle SHIT